Choosing the right board

Presented by Sun and Surf Products

Over the last 10 years working at Noosa Learn to Surf School coaching beginners and intermediate surfers, I have helped hundreds of people get the right kind of board for their particular height, weight and ability. From small kids to large adults all with the same goal in mind, to get out there and have the most fun !

Once a beginner surfer has learnt the basics of surf safety, positioning on the board, paddling, pressing up properly (probably the most key factor to stand up success) the right technique for feet placement, body torque, using arms for balance and direction etc, etc.. No matter how much we teach someone, without the right board for them its useless. For a normal size adult we teach on 9ft. Soft Malibu G boards, for smaller light weight kids an 8ft. G Mal’. The key is to have good amount of height , width and thickness. The bigger, wider and thicker the more flotation, more stability to start with to find your balance to stand up success.

Once a student has learnt on one of these big boards and is doing all the right technique, then the next progressive step is to move on to a slightly smaller board. Many people try to get a short board like a pro surfer, either to look cool or because its way easier to carry and all too often give up on surfing because its just way too hard to paddle for a start and really unstable. I’d liken it to learning to drive for the first time in a big long bus and then you get behind the wheel of a Porsche sports car ! before you drove your dads Commodore ! Progression is gradual and takes time in the waves.

From seeing first hand out in the water what works and why for different people, I came up with a few design choice options with S&S – Sun and Surf Products. For kids under 14 who have just learnt and parents still mindful of the safety aspect , we offer the best Performance Softboard i’ve found that surfs like a real hardboard. The Redback Performance “Revolution series” or the “Surfoplane series ” eg. The 6ft. ‘Quick stick’ or ‘Surfoplane’, 7 ft. and 8ft. Performance or Surfoplane Malibus. Their shape and fins are far superior to other soft models. 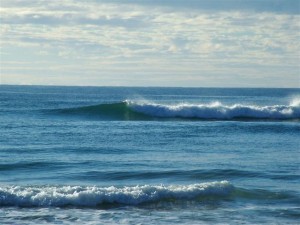 For lighter weight true intermediates there is a 6’6″ fish option. The rail shape has a lower profile and sharper edges, so its not as forgiving but super fast and so you need to know how to transfer weight by moving your feet, just some of the things we teach those progressing to be intermediate surfers.

For regular sized adults (say 5’10” + over 75kgs) who start out on a 9ft. board they may go down to an 8’6″ board for an intermediate lesson to gain the skills required to go surfing on their own. Once they’ve got these vital skills like timing, wave choice, how to handle being in a rip, how to turn left and right, feet movement for speed and turns etc.. etc.. then they are ready to buy their own board.

Now, what board to get ?

I highly recommend a Mini Malibu of various sizes for a number of reasons. The main ones are for a persons height, weight and ability. The Mini Malibu is such an “All Rounder”. A straight Malibu surfboard is ok if you are only going to surf little soft rolling waves say at little cove point Noosa. But what happens when you start surfing pitching waves at most beach breaks ? Say hello to the bottom of the ocean again and again you are going to Nosedive and faceplant …alot ! Experienced surfers who know how to transfer their weight may be able to handle the pitching waves on a straight malibu, but not a beginner or an intermediate that well, unless its soft and cruisey, small rolling point break waves.

The design aspect of a Mini Malibu allows for what we term ‘bottom curve’ ie. Nose lift and Tail lift. You’ll need some degree of nose lift so one doesn’t nose dive as much. The tail lift allows for easier turning and speed as water flows out the back faster. Too much curve or banana type bend then speed and go forward is lost and board can be too loose and out of control for your ability.
The curve of the board fits into the contour of the wave better so one might not nose dive but may not allow for you to keep going and one just stops and gets caught up in the white water. The experienced surfer really needs to pump these boards to get them going unless its say 6ft+ overhead strong waves, but with this surf a beginner or intermediate surfer would find these conditions pretty confronting and difficult.

So beginners progressing to intermediates take it easy in smaller more manageable conditions like safe rolling beach breaks and not bigger pitching, throwing over type waves where really advanced paddling and timing are required for success. A general rule for choosing what height of board to first get is at least 2 feet longer than you are or a little more than arms reach to the nose when you stand board up and put your arms up above your head to touch the nose of the board. Width wise i like at least 22″ wide for bigger people and at least 20″ wide for smaller. Fish type surfboards although smaller in height really make up for it in width. The thickness of a surfboard has alot to do with its bouyancy in the water relative to your weight. The Performance boards we use in our surf school for those progressing to an intermediate although smaller than what you first learn on, they have a really good amount of thickness. This flotation ability helps with developing ones paddling ability and being able to catch waves more easily.

For adults or bigger kids looking for a hardboard the go to Mini Malibu boards have been mostly from around 7’6″ –  8’6’s. So somewhere around 7’9 to 8″1 suits most regular height and weight people. I recommend around 3″ thick and for lighter weights at least 2 1/2 ” thick. Once you have had a good amount of time on your Mini Mal’ and steadily improving with every surf the next board may be just a little smaller, less wide and thick. Remember you will have to paddle harder to get on waves and the board will be more unstable but easier to turn and carry at last ! 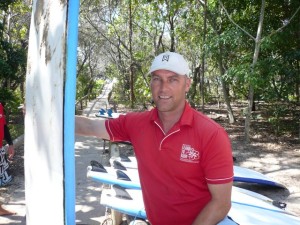 Talented surfers who are progressing really well to intermediate level and want to go shorter may be ready for what we call a ‘Big Fish’ or an “Egg” or “Potato”. These boards are shorter but relatively wider at the mid point and under your chest for greater paddling ability. Remember you still need a good amount of thickness for flotation. The ‘Fish’ is a retro favourite and its namesake comes from the swallow tail which looks like a fish’s. Although really fun to surf, one needs to take extra care of the tail on these boards as they tend to chip, break at the tips, especially if you stand them up on hard rough surfaces. I’ve found Round tails and rounded square tails to be much more durable over time. Invest in a decent boardbag and it will protect your surfboard and your car ! Of course for your own safety and others buy a decent legrope. I stock the best, Ocean and Earth. A simple guide for the size depends on your board size, so for 8ft. boards get an 8ft. legrope.
More on accessories next blog.